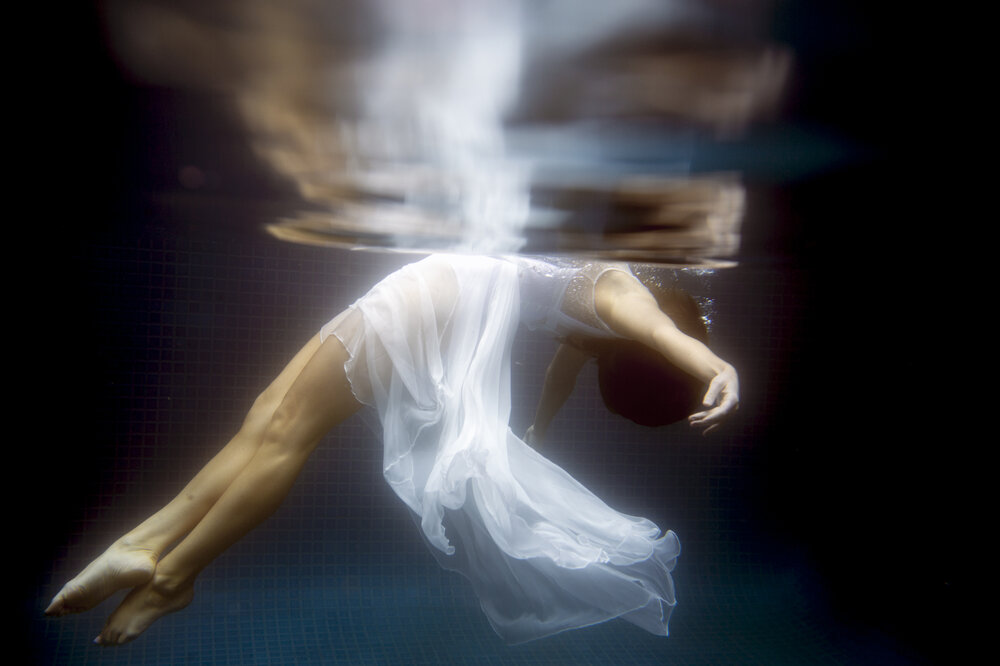 Caught up in a whirlwind, we could easily forget to notice all the beautiful things around us and indeed there are many! During these times of great uncertainty, we are continuing our mission to help women build on their dreams whilst offering encouragement and support where needed.

In this blog, we thought to shed some light on three very talented, yet very different female photographers. We asked Therese Debono, Rebekah Kamsky and Alisa Henderson to send us their favourite portraits of women which they themselves produced. The idea is to strengthen our virtual connection through the power of a creative medium and for a few moments, appreciate and experience some of the sentiment and skills both in front of and behind the lens.

Spaces, streets and portraiture are among Therese’s most explored and interpreted subjects. Her personal projects include Maltese Interiors, Brides on Beds, Class of ‘93 and Portraits of Youth. Her main work with places, revolves around the loss of heritage in Malta as well as the over development currently on-going, that is destroying the spirit of the places once so powerful and unique on the island. Her latest project ‘Blank’, is an activist investigation against the excessive building industry.

Therese grew up in Malta. Entering the photography scene aged 30, she credits her mentors Kevin Casha, Profs Vince Briffa, Joe Smith and Gary Hampton, each of whom have been instrumental to her at various stages of her photography career.  Graduating from the University of Malta with an MFA in Digital Arts and an MA in Cultural Heritage, Therese currently lectures photography and cultural heritage units at MCAST Institute for Creative Arts, as well as photography units at University of Malta within the departments of Communications and Media and Knowledge Science.

The following images depict the versatility of Therese’s work with women as the subject. The first to feature, is part of the Art + Feminism 2020 exhibition at Spazju Kreattiv entitled “Brides on beds” where true to local tradition, women would sit on their own or their parents’ beds before walking down the isle the following day. For reference purposes and in order to gain a more in-depth understanding of each photograph, we’ve included the creator’s own notes beneath. Enjoy! 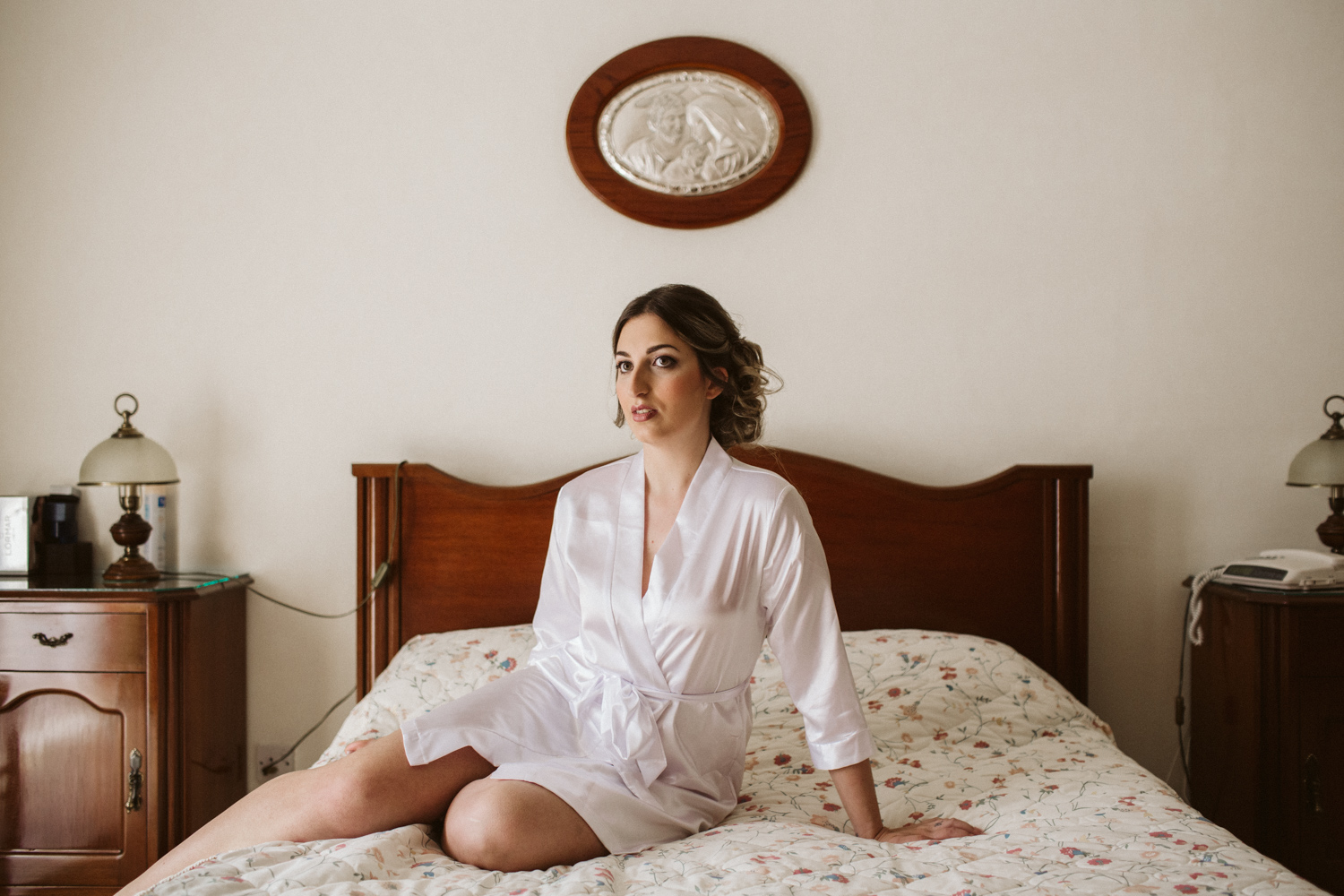 I met Angela through her wedding. We had already met for her pre-wedding shoot so on the day I knew her a bit already. I was already doing my project ‘Brides on Beds’ at the time and Angela was more than willing to pose for me. On the day, her house was super busy as expected but there were some tensions that were dampening slightly the mood. I took the opportunity to get a few moments alone with Angela in her parent’s bedroom. It was just her and me. I could feel her nerves but also her excitement – Angela, an architect, was an intelligent and strong woman who believed fervently in love. At one point during the shoot, I could feel that she found her zone. It is a moment which I can’t describe but I can surely feel – Angela stood on her bed and glanced away – capturing her lost in her thoughts was the right moment for this portrait. 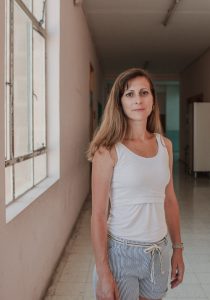 Two summers ago, I started a project called ‘Class of ’93’.

The objective of this project was to take a portrait of each girl that was part of my life at St Theresa Secondary School, Mriehel. I scouted the school before starting this project and I found this part of the school with walls painted in pink and wide apertures for natural light to be the right place for the portraits.

I spent my summer meeting girls from my school year every day. It was great catching up with them and seeing where they are in life. Some of them were coming from abroad to visit their families for summer.

I chose Catherine from this series because of her stance and the feeling she gave me whilst shooting. She is not one for posing, but after a bit of chatting she got in the zone and just stood there in front of me. I knew I had a good shot way before I shot this portrait. I could feel that she was letting go of everything and just standing there for me to capture her likeness.

Catherine – the cheeky 5th Former, now a woman in her 40s. 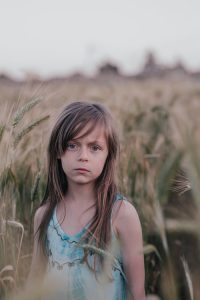 I shot Katie in summer 2018, when she was seven years old. Her mother, who used to train athletics with me in Secondary school contacted me for a shoot with her daughter. My thoughts were the following: where can I take a spirited 7-year- old for a shoot? Since they lived in Siggiewi, I decided to go to Fawwara area and let the girl run in a field to use up all her energy while I shoot away.

I must say it worked. The girl in her light blue dress, ran in the fields and showed me all sorts of bugs and flowers.

She did not stop talking and not just any chit chat, but clever conversations that stimulated me to keep on going.

At one point though she stopped and looked at me – at that moment I was looking at her through my camera, I felt a shiver and I shot.

I knew that I got my best shot of Katie. She is not smiling in this image nor is she angry. It is just her, spirited and inquisitive Katie.

On to a very different style of portraiture, Australian-born Rebekah Kamsky brings us women appearing beautiful in their fragile form, yet at the same time, showing strength in femininity. With experience in digital marketing spanning over a decade, Becky eventually settled for island-life in Malta (which is where she was raised as a child). Here she created littleisle.com – a bespoke media agency helping small, businesses get ahead in a competitive market. With eyes wide open, our next-to -feature photographer embraces any opportunity to travel, whilst feeding her passion of photography through music, poetry and art. When approached about participating in this project Becky expressed the following in an email:

“To choose my favourite photo, is probably what it’s like asking someone to choose their favourite child. Incredibly difficult to do. However, these are three photos that mean the world to me and here are the reasons why…” 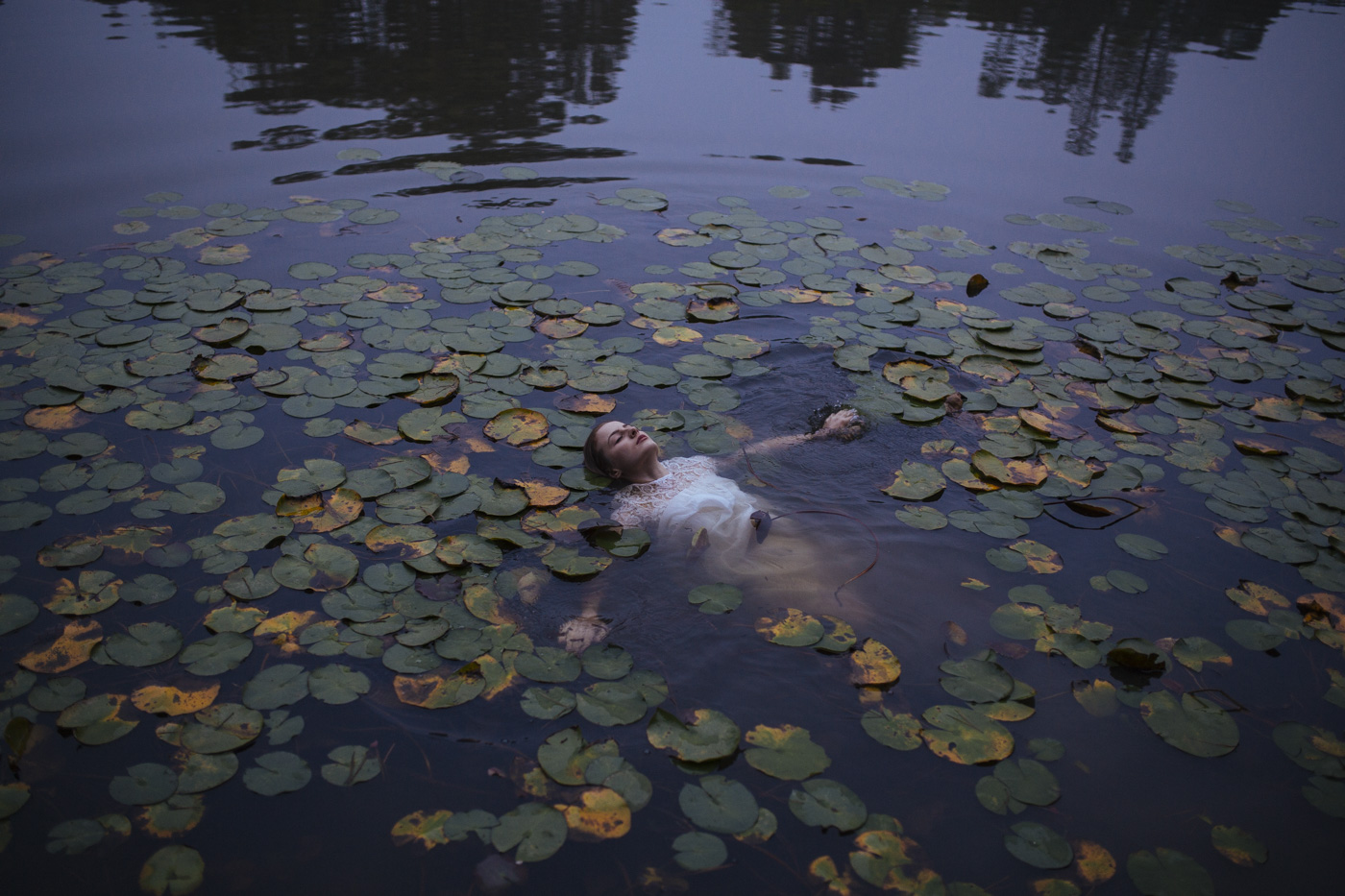 This photo; called Ophelia had been a concept in my mind for many, many months. I knew it would be challenging to bring to life. It took weeks to find the right location, and I would often have to drive two hours away to simply scout locations. After months of preparation, I found an incredible model that was willing to bring my vision to life.

There’s a lot of work and time involved in this photo as well as resilience. I love this photo because it reminds me of reaching my goals. The actual shoot was a really hard one, it was freezing on that day and we were awake at 3am to be at the location in time for sunrise. The location was eerie and dark, and we had to hike for a while to get to the right spot.

We also had just a few minutes to get it right as I knew the water would be freezing and I had to look out for the model as well as capture the light in the perfect moment.

I love that the photo has a sense of calm and strength all at the same time, which is often the power of a woman. I just love it when a photo that has been in my mind for months comes to life and this photograph is definitely one of them.

This photo is extremely meaningful to me for two reasons;

Firstly, It’s when I fell in love with underwater photography. Probably having grown up on an island surrounded by water, and the sea being a large part of my childhood memories, I always wanted to take my photography to the next level and shoot underwater. I had bought my first underwater case (which was an entry level in-expensive housing kit to put you in perspective it looked like a giant plastic bag with a simple seal on top) and with panicky hands wrapped my expensive camera and lens into it, praying it would stay alive as I lowered it underwater. My heart was beating incredibly fast, as I knew it was a big risk to take, but I wanted to take up a new challenge and bring another idea I had in my head to life.

For those shooting portraiture and dance you can probably imagine how difficult it is to do already on land, let alone while you are trying to hold your breath, look into a screen, assess the settings of your camera and direct your model while staying afloat. Underwater photography allows me to enter a world where everything is surreal, beautiful and quiet which contrasts so much with the business of every day life.

The second reason I love this photo is that it is the first photo I’ve ever sold, at the first exhibition I ever organised and the first photographic event I ever took part in. The exhibition was something I had decided to organise to help raise money for girls’ education in Africa, and with each print sold, a girl was given an education for an entire year. You can read more about that experience here. So you can only imagine why this photo means the world to me, and still means the world to me, as it reminded me that something that brings me joy, could be something I do for the good of others. 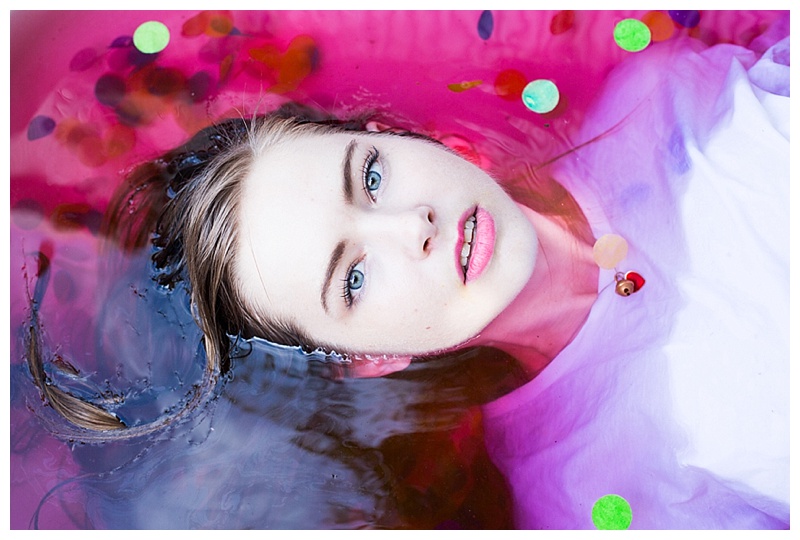 This final photo is one that means a lot to me too, because it was a photo that ironically didn’t have a lot of thought and dedication, and resulted out of just spending an afternoon having a bit of fun, experimenting and trying new things! More than that, this photo was published on the front cover of an Australian creative magazine and it was the first time I was recognised for my creativity and photography.

I still pick up that magazine from time to time, and remind myself that when you’re loving what you do, you immerse yourself, challenge yourself, put yourself out there, network and have a bit of fun…. sometimes, the universe responds perfectly, and things work out well, and the rest simply just follows.

Born in St. Petersburg, Russia, Alisa earned a Bachelor’s degree in Human Resources management. It was around this time she discovered her true passion for photography. Being self taught, she took a receptionist’s position at an inner city photo studio to get closer to the action. Eventually this led to work as a photographer’s assistant where she gained a great deal of knowledge and experience from more seasoned practitioners. Now living in Malta, she enjoys her status as a budding freelance photographer where she applies her own whimsical vision into her work.

Inspired by world-renowned photographers such as Peter Lindbergh and Annie Leibovitz, as well as artists of the Renaissance period, she fell in love with people, their mood and emotions. Being mentored by local photographer Matt Thompson and Russian specialist of visual arts Alexander Medvedev, she explores the inner beauty of her characters and their feelings and this certainly shines through all of the portraits she produces.

Alisa passed on the following images which to ourselves, are immediately striking especially as we can’t seem to escape the powerful gaze of these women. We leave you now, to form your own interpretations. Perhaps you’d like  to continue the discussion and let us know your thoughts about these works. If you’re feeling up to it, why not write to us at info@shemalta.com and tell us which style of capture you gravitate to most of all. As always, we’d love to hear from you.

Stay safe and keep supporting each other. 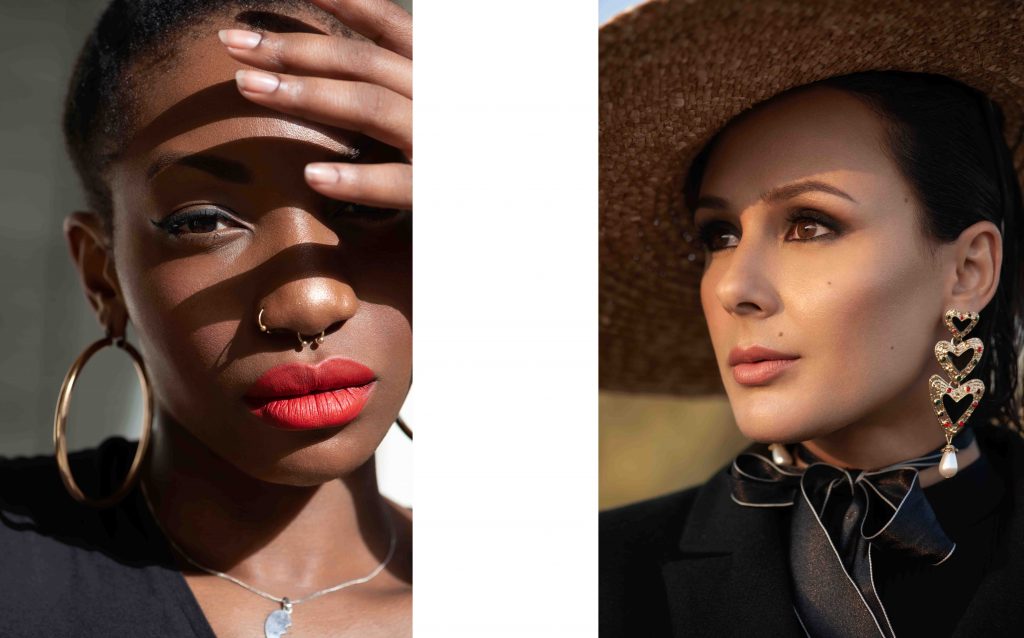